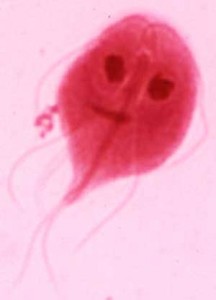 Giardiasis is an intestinal infection of man and animals caused by a protozoan parasite Giardia intestinalis (also known as Giardia lamblia).

Giardia is a simple one-celled parasitic species; it is not a “worm”, bacteria or virus.  The parasite occurs worldwide and is a common cause of “Traveler’s Diarrhea” in people. Outdoor enthusiasts who inadvertently consume contaminated water may develop “beaver fever”, which is another name for giardiasis in people. Other examples of protozoan parasites that can cause enteric (intestinal) disease are Coccidia, Cryptosporidia and Toxoplasma.

Giardiasis can be an important cause of illness, especially diarrhea, in animals and man. However, the majority of dogs infected with Giardia do not have diarrhea, vomiting or any other signs of illness.

The Giardia organism has two forms. A fragile, feeding form exists in the gut of infected animals, while a hardy cystic form is shed in feces and can survive several months in the environment, particularly in water and damp environments.

What are the clinical signs of Giardiasis?

These microscopic parasites attach themselves to the intestinal wall and the damage causes an acute (sudden-onset) foul-smelling diarrhea. The stool may range from soft to watery, often has a greenish tinge to it, and occasionally contains blood. Infected dogs tend to have excess mucus in the feces. Vomiting may occur in some cases. The signs may persist for several weeks and gradual weight loss may become apparent.

“The disease is not usually life threatening unless the dogs’ immune system is immature or immunocompromised.”

The diarrhea may be intermittent. Most dogs do not have a fever but may be less active. The disease is not usually life threatening unless the dogs’ immune system is immature or immunocompromised.

How is giardiasis treated?

The most common drug used to kill Giardia is metronidazole, an antibiotic. It is normally given for five to seven days to treat giardiasis. Another antiparasitic drug, fenbendazole, is suggested as a potentially useful treatment, especially when used in conjunction with metronidazole. This combination is usually administered to cats with refractory diarrhea (diarrhea that hasn’t responded to treatment). Supportive treatment with other drugs may be needed as supplemental therapy if dehydration or severe diarrhea is present. Some dogs may require follow-up tests and treatments based on their condition and severity of infection.