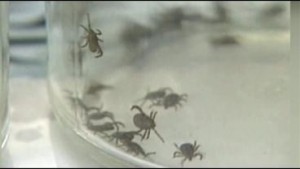 According to researchers at the Wadsworth Center, the deer tick virus, also known as Powassan virus, has been found in Saratoga, Albany, Rensselaer and Columbia Counties.

Researchers who worked on a five-year study say that the amount of ticks with this deadly virus are increasing, and if someone have been bitten by a deer tick, there is a one in 20 chance that it has the fatal illness.

Another alarming result of Kramer’s study is the virus is transmitted at a rapid rate, compared to the two days it takes for Lyme Disease.

“With Powassan virus, deer tick virus, it looks like it’s about 15 minutes,” she says.

With summer camps in full swing, hundreds of kids are at risk of catching tick borne illnesses

“We’ve seen an increase in ticks in both wooded areas so it’s been an initiative of ours to be more cautious,” says Kristen Usher, YMCA camp director.

As campers head to walk trails, preventing tick bites is a major concern. The camp has asked for parents to help them, by taking a few simple steps.

“We ask them to send the kids in with insect repellant and light colored clothes,” Usher says. “We also have them do spot checks. The counselors spot check the kids at least once a day.”

The best way to prevent contracting this potentially fatal virus, is to prevent ticks from attaching to you – wear long pants in wooded areas and use insect repellant.